I know I usually just write about decoupage here, but today I’m gonna tell you about a school project I’ve been working on this semester.

So, I’ve been working on a school project for a while. I think it started in January or February (my memory sucks) and the deadline is tomorrow! No panic though, I’m pretty much done. Just fixing the last pieces..

The purpose with this project is for us students to learn how to make a 15 second ’ID spot’ each, for whatever company we’d like. Some of us, including myself, decided to make an ad for ourselves. I don’t own a company, however. Yet ;)

I started my project by making the script and the concept art for it. The first idea I had was a short film featuring a wooden musical box with a silver paper crane inside and cherry blossoms in the background, creating a sweet spring-like mood. I’ve never really had or seen a cherry tree ’live’, so to speak, so they’ve always been this beautiful, unreal fairytale creation to me. Very magical compared to the overwhelming amount of pines and spruces we have in the north of Sweden! 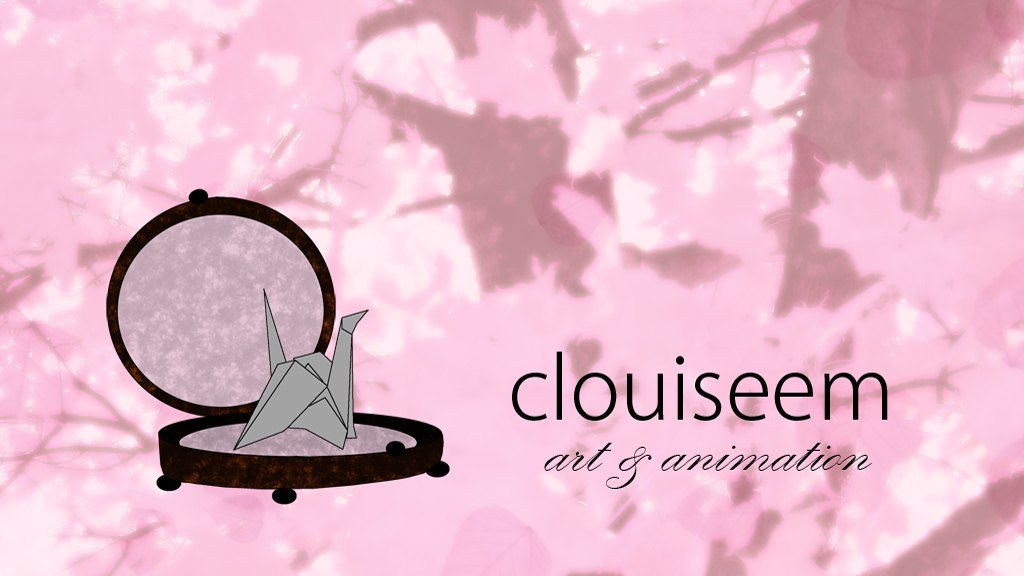 concept art
and yes, I know it’s not cherry blossoms in the back, but this pic was just to sort of set the mood for a while…

As the time passed I felt pink wasn’t really ’me’ and because I was making the ad for me I kind of needed to change a few things. Don’t get me wrong, I love pink – I love all colors – but the idea was to make an ad for my paintings and they are never pink. At least not yet anyway. So I changed my mind and tried something more ’sepia’.. Soon my mind was set on junkyard. Imagine an abandoned musical box in a junkyard..

I’ve alway had this thing for musical boxes. There is something mystical about them, some kind of beautiful sadness in the loneliness of the ballerina who is spinning around slowly to the music.

I also love paper cranes. There is something mystical about them too. There are a lot of myths about paper cranes, but to me they’re symbolizing love and hope – ’Never give up on your dreams’. And if you think about it a paper crane fits kind of perfectly to my paintings considering pretty much all I use for them are paper.

I started modeling the crane and the musical box in 3D Studio Max and added texture to make it look rusty and worn out. Then I made the ground with bottles and junk and started animating the whole thing. It wasn’t very difficult to animate, not a lot of special effects etc, but it’s a first time 3D-animation for me and I think it went pretty well :)

I’ve edited the film and added the logo in Adobe After Effects and Adobe Premiere Pro where I also added the music!

As I wrote yesterday the sound wasn’t settled yet, but I obviously had an idea of what I wanted the music to be: tunes of a musical box of course! ;)

Now I do actually have a few different mechanisms of music boxes. Two from when I was little (I tore up the boxes to see where the sound really came from) and one that I bought last summer that was just too beautiful to resist! They all play different tunes and I tried to capture two of them for this project, but did I have the fucking equipment?!

I realized I needed to build a ’studio’ to kill all the white sound. So I took a banana box and covered it with two blankets, two pillows and put it on my bed, you know to isolate and reduce echo.
I got my mp3 player – not even an iPod, a fucking MP3 player that I bought at least 6 years ago! lol. I winded up the music box and set the mp3 palyer to record, covered them both with my excellent mini studio and waited silently.

It went horrible. I tried again and again, used my (2 years old) cellphone instead, it sucked even more. I tried to fix it in Premiere Pro, but my skills aren’t that good. I got so frustrated and just wished there was an easier way to do it..

I knew I had this amazing song, called Bright Lights by the British band The Candle Thieves, on my laptop that sounds just like a music box for about 15 seconds at the ending. If only I could use that sound without breaking any copyright law… If there only was a way…..

I sat for a few more hours trying to get the lousy recordings to work when my brain finally started working and I got the brilliant idea: Why the hell don’t I just ask them? Why don’t I just ask the Candle Thieves if I can borrow their song for this project? I mean, the worst that could happen would be if they just said ’no’. It’s not like they’d send the Mafia over to an insignificant Swedish island to kick my butt.

So I tweeted (yes, that is how people communicate these days, get used to it) and asked them for permission to use their song. Within an hour I got the answer – ’Of course, feel free and thanks for using it!’ :D

Haha all this time I could have saved! Oh well, at least I gave recording on my own a try before ’giving up’.

They really are nice guys those Candle Thieves! They really helped me out and I truly appreciate it. They’re my favorite band and Bright Lights (from their debut album ’Sunshine And Other Misfortunes’) has been one of my absolute favorite songs ever since I first heard it about a year ago. It feels really amazing I got to use it for this project. I’m so grateful! ♥

– Everybody should really check out The Candle Thieves and buy their album! Don’t think anyone would get disappointed! :)

Script, animation, cutting etc by me, Louise Mellergård
Music by The Candle Thieves

It kind of went from pink fairyland to dirty junkyard, but I kind of like it!

This entry was posted in 3D, Finished projects. Bookmark the permalink.