As a child I was a bit odd. Well, some might say I still am. But as a child I had what I suppose many would call weird hobbies: I chewed on sticks I’d picked up from the ground. I also ate some flowers, grass and I think I gave it a go with sand as well. I kind of liked the taste of Mother Nature.

Another hobby I had was picking up trash from the sidewalk and put it in my pockets. Me and my family took short trips to the capital city Stockholm every now and then and after a day out visiting the museums, the city, the amusement park Gröna Lund my mum found tons of junk in the tiny pockets of my red little jacket. There were lolly sticks, a lost pacifier, the scull of a tiny green, plastic skeleton, a few feathers from different birds, a rock, an empty tampon box, a pen, a small piece of pink Styrofoam, used napkins, bottle caps and many, many more things..

It’s not that we were extremely poor and couldn’t afford toys; I choose to believe I had a way of seeing the beauty in things other people didn’t. My imagination was amazing! One time my dad came with his hands closed and said he had a surprise for me. He opened them and gave me a small piece of fabric fluff. He was obviously joking, but I gladly took it and pretended it was a magpie. I also had a tiny rock which I pretended was a pig, because of its vague shade of pink.

I suppose you might say I was a bit of a bum, and I still am a little. My type of art is all about seeing the potentials in the things you might usually throw in the bin. I’ve always considered tossing the jaded hair band I broke three years ago, but I always end up keeping it, you know “just in case!”.

A few days ago I realized that some wrappings around tea bags are really awesome looking! I mean really! Just check out the ship on the Four O’clock Earl Grey tea I bought. 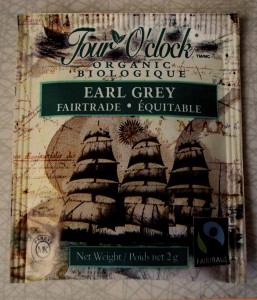 The tea itself wasn’t very tasteful, but the ship! The SHIP! Ah. It made my day. If you’d ever see someone standing by the tea section in the groceries grinning and looking almost religiously excited it’s probably me you’re seeing. Come say hi :)

This entry was posted in About me. Bookmark the permalink.